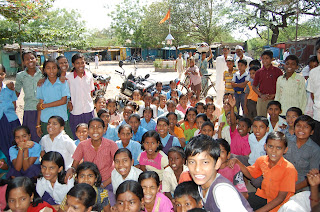 The Children of Kannur In the month of July, 2011, Deepak Paramanand and a few of his friends ran a summer camp for a few under privileged kids in the village of Kannur, in Bijapur, North Karnataka, India. They conduct these courses every year, where teachers volunteer to teach the next year portion for the kids. The children are also engaged in a few cultural activities. In 2011, they showed 'Putaani Party'. The children who acted in the film were called for the screening. After a healthy discussion with these children, the next day the children of Kannur marched through the lanes of their village making a case against alcoholism. They petitioned the Gram Panchayat (Village Governing Body) asking them to stop units in their village that sell illegal liquor. The insistent children brought the government officials and the police to the scene. The children were aided by self help and some women's groups. The Panchayat then decided to ca
Post a Comment
Read more
More posts