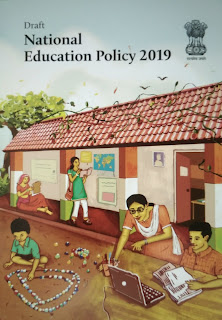 The cover page of the Draft of National Education Policy - 2019 The Draft National Policy of 2019 on Education was released by the Government of India on the 31st of March 2019, a day after the election results were announced. Here is a montage of a few paragraphs nested under a  subsection of titled ' Education in the local language/mother tongue; multilingualism and the power of language ' - and some reflections on them. Page 81 of the Draft Education policy echo these words, " Children learn languages extremely quickly when immersed early, and multilingual children in studies around the world have also been found to learn faster and be placed better later in life than those who are unilingual ....... A multilingual India is better educated and also better nationally integrated .... ''. These words embody the noble intentions of the policy which clearly asserts that the exposure to multi languages early in life would be beneficial to the individual
Post a Comment
Read more
More posts