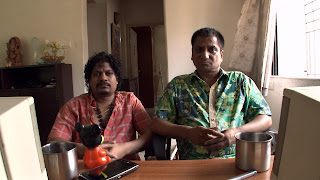 Click to watch  Haal-e--Kangaal (The Bankrupts) Though I have always fathomed myself as an eager digital migrant,  like some of us from my generation I have been in the fumbling mode while grappling with possibilities that this medium holds. The medium has empowered me in the making of all sort of independent movies which otherwise I would have found it difficult to create and produce in an previous era. The one pertinent aspect of digital movie making is that it is democratic in nature - in the sense that you don't have to necessarily depend on the exhibitor - distributor lobby to raise funds to make them. Today anyone in any remote part of the country having access to affordable machines and tools can make a movie; unlike before where one had to physically shift to select film making centers like Mumbai, Chennai, Kolkata, Bangalore or Hyderabad to make movies. But it is the second aspect of the medium whose dynamics is what I have been trying to grapple wi
Post a Comment
Read more
More posts