A sunrise at Telangana. It is only in Hyderabad that someone like Parushuram Singh can sponsor a Biriyani and listen to the Telangana VS Seemaadra argument initiated by someone like Upender Apparasu. If Parushuram had anything remotely to do with any Government in India, in present times he could have initiated a case of sedition against Upender. Elavarty Satya Prakash and I, who had wry smiles on our faces during this discussion, would also be liable, then. Fortunately, Praushuram and Upender are just two old colleagues from the film world - local Hydrabadies. We were sitting in a cozy roof top hotel at Hyderabad when we were having this discussion and after attending a screening at Lamakaan of my recent film ‘Haale-Kangaal’ (The Bankrupts). Lamakaan Lamakaan is a cultural hub in Hyderabad. Recently, there were murmurs that it would be asked to shut down, allegedly due to parking issues that were created when culture shows happened here. But a swift signature camp
Post a Comment
Read more 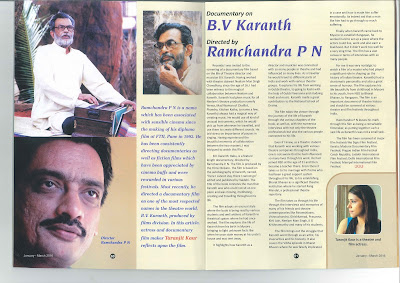 The rest is personal... 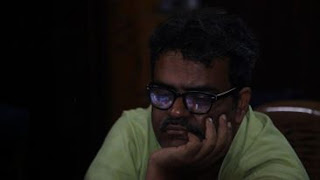 Sumit Ghosh Sumit Ghosh is an affable character.   Although he joined the Film & TV Institute of India a year after I did, we graduated together, as he was in the editing course, which was then just two years. For a year or so, he was even my neighbor at the institute hostel.  I had requested him to support me in arranging a few screenings of ‘Haal-e-Kangaal’ in Kolkata. Referring to the dates that I had chalked out he had mailed me, ‘Oh, why did you plan during those days?’ He was worried that we could not meet, as he was to go to the North-East for a workshop. But before going he had put me on to filmmaker Pradipta Bhattacharyya. Pradipta Bhattacharyya Pradipta Bhattacharyya had made “ Bakita Byaktigato ’ (The Rest is Personal), a film in Bengali language that is not only refreshing in it’s form and content but it had also broken away from the conventions of the ‘realism’ debate that Indian cinema has gloriously clung on to, over the years, ever since Satyaj
Post a Comment
Read more
More posts