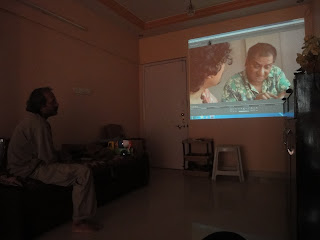 Cameraman Narayanan Venkataraman watching a projection in Mumbai It was clear during the very conception of the film 'Haal-e-Kangaal' (The Bankrupts) that it would be difficult to find a conventional release for it. Despite this, the small crew that the film had, did get enrolled into the making of this film. They found it worth giving their time and effort for the film and I am thankful for them.  We shot the film in 2013, had a rough cut in 2013 itself. I then met a producer who had once asked me to come to him, if I had an edit in hand. It would be easier to for him to 'pick' the film because half the work was already done. He met me, heard me patiently and told me that he would be needing a minimum of 25 lakhs of rupees to be put into publicity and marketing for any film to have a conventional release, however limited it maybe. 'If I had that kind of money, I would put it into real estate', he added. Very logical. He already had two such
Post a Comment
Read more
More posts