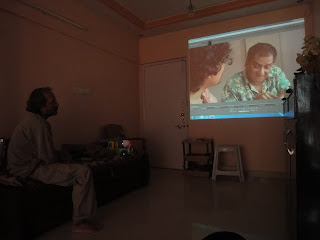 Finally, Haal e Kangaal (The Bankrupts) is seeing a VOD (Video on Demand) release at MOVIZZ.COM. Please do click on the snap below, go to the site, log in, watch the movie and tell us about it. 'Haal e Kangaal' being watched on demand If you want to screen 'Haal e Kangaal' (The Bankrupts) or any of my other film in your schools, colleges , film clubs and offices, please contact us  HERE.
Post a Comment
Read more

The Peda from Dharwad

There is something about Dharwad that makes me go back to it every now and then. Dharwad Pedas Although this is where I had shot my second feature film ‘Putaani Party’  in 2008, my first memories of this place dates back to my childhood. We were transferred there. I was in my high school, then.  It was here that I had started learning cycling. It was here that I was waiting by the highway, in excitement for three hours on an empty stomach, to watch the London-Sydney care race, getting thrilled by the swanky cars zip by.  The route touched the town of Dharwad and our school had declared half a day of holiday, so that we kids see this race.  It was here when we friends giggled away to glory when we watched a naked monk who was on a religious padayatra (a tour by walk). Poor man, he was oblivious to our intent. It was here that I saw my first film shooting - that of Shankar Nag's 'Minchina Oota'. We had taken his autograph, then. It was here that I first saw G
Post a Comment
Read more
More posts