Showing posts from November 8, 2015
Show All

Email conversations with a cinephile. 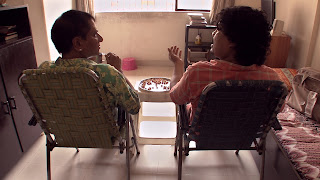 To MK Raghavendra Greetings. I have today sent you a dvd copy of my new feature film called 'Haal-e-Kangaal (The Bankrupts)'. I was wondering if you could see the film at your convenience and give an opinion on it. ******* Dear Mr Ramachandra,  A still from Haal-e-Kangaal (The Bankrupts) I watched your film and found it very interesting conceptually. But here are some critical comments: a) It is a very personal film, I think, about the dreams film students have, the compromises they make and where they finally go. I would say that it is very, very pessimistic. It shows how most lives are actually wasted. 20 years after graduating people are forced to tell lies to those who were once closest to them – to look better than they are. It is also about the end of friendships . b) Its difficulty is that it is too personal. It is like making a film only for those who have gone through the same experiences. There will be very few who will feel what you feel by watchin
Post a Comment
Read more
More posts