Showing posts from 2009
Show All

- October 09, 2009
A script writing and production software installed in an ultra lightweight laptop. A soothing alarm clock that wakes you up at 4.00 A.M. A library of essential books and DVDs. A film camera and a digital video camera, stored side by side. A heavy duty computer set up that has the latest version of Adobe Premier that can take in High Definition and that which has a film option. An Apple set up with Final Cut Pro and Pro Tools installed. A ‘chakaas’ noise reduction system. A projector that has ‘danchak’ luminance. A three bedroom-hall-kitchen flat – one bedroom each for edit, sound and a mini screening room. E & OE (errors and omissions excepted)
3 comments
Read more

- October 01, 2009
The B.S.K.B. is an association of people from a particular community migrated to the city of Mumbai from the districts of Udupi and Dakshina Kannada in coastal Karnataka. One of the activities that it undertakes is the running of the newly formed old age home in Nerul, Navi Mumbai, called 'Aashraya'. A few days back a screening of SUDDHA was arranged for the mostly Tulu speaking inmates of the old age home. Unfotunatly, for some reasons, it was not possible for me to go to the screening. I guess, it went off well and am eager to know the reactions of the inmates towards the film. If you are looking to arrange a screening for your club / college / house / office please click HERE
Post a Comment
Read more

- September 11, 2009
In a recent hectic outdoor shooting of mine, more than half the unit members had gone down with diarrhea and related illness. We thought it was the stress, but there would have been shoots that might have resulted in greater stress levels. We thought it was the food; we had changed at least four caterers - all in vain. We thought it was the water; but we were supplied with the minral kind. Did we think that it was the way we handled them that caused the illness....? Hmmmmmm... I am afraid not. Could I have avoided the bitterness that followed..? I regret for not having put systems in place which could have created the possibility of a compassionate man management approach that has nothing to do with a budget of the film. Sorry, I was ignorant that it needed to happen. I thank my unit members who despite receiving some 'filmy treatment', never allowed the nastiness to creep into the film.
4 comments
Read more

The dog and it's tail.

- August 29, 2009
Once an accountant, always an accountant. Once in doubt, always in doubt. A hand tries to straighten the tail. The dog bites the hand that feeds it. The habit of seperating the production from the film. Once a film maker, not always a film maker.
Post a Comment
Read more

Om-Dar-Ba-Dar - a revisit and a few thoughts.

- August 04, 2009
Last week, I managed to watch Kamal Swaroop's 1988 film 'Om-Dar-Ba-Dar'; after almost twenty years. Kamal was showing the film to some of his students in a school of architecture in Mumbai. The hall was petty much crowded when the film began; by the time the end titles rolled in, there were lots of empty chairs. Not that the filmmaker minded it, I thought. Considering the filmmaking path that he has been walking, maybe he is used to it by now . In the discussion that followed, Kamal in his own subversive manner, narrated the non existent 'story' of the film and its 'meaning'. It was as 'meaningless' as the film itself. The ability to comprehend a chair as a chair... It takes some amount of discipline and practice to watch a movie without assigning any meaning to it. What meaning would one assign to a ‘collage’? What meaning would one assign to a ‘aalaap’? The manner in which Bhimsen Joshi sings a ‘Bhajan’ could be interesting than the meaning of the
2 comments
Read more 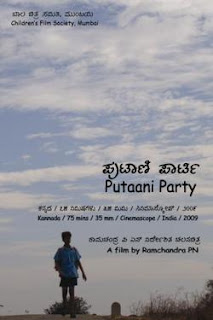 The Waiter and the Cutter...

- May 20, 2009
The spoon that gets wiped on dirty pants, serves the dish. The hand that cleans the nose, winds the negative. Thus goes the story of the waiter and the cutter.
Post a Comment
Read more

The Tough, the Missing and the Scratches.

- May 19, 2009
The mantra was to complete, deliver and move on… But hey, wait… where is the protagonist? When the going got tough, the tough got missing! Information withheld knowingly, facts released untimely; There could be scratches on the emulsion.
2 comments
Read more

Hand and the nail.

- April 25, 2009
The shoot, the edit and the sound generation… It’s all just a preparation. The union of Picture and Sound… The ultimate moment! Miss this and miss the film. A hand hammers a nail on to itself.
3 comments
Read more

Frog and the Pond

- February 24, 2009
Me thinks, the most interesting part in the film 'Dev D' occurs only at the fag end of it - when Dev supposedly gets a realization, as a car nearly runs over him. Unfortunately, the events in the film unfold very rapidly after this point and before you can blink, the film ends. It therefore becomes nearly impossible to savor this change in the character’s thought process and hence, in his life. I wished that it had got more screen time and I wished that the purpose of this film itself was this transformation. Otherwise, I thought, the ‘materiality’ of the film maker with regards to his film was quite evident.
7 comments
Read more

- January 31, 2009
I was sitting on the bench in front of the intensive care unit of a hospital. A close relative was inside. He had just had two attacks of convulsions, he was restless, had no sense of space or time, did not know what he talked nor could he relate to anything told to him. The doctors had opined – it was an imbalance of a chemical in his body – a chemical called Sodium. I had hated chemistry in my college. 36 or 37 percentage was all that I could ever manage in that subject। Beyond H2O and HO2, nothing would make sense. I remember of even swearing that I would never touch chemicals and chemistry again. Alas, how wrong was I... As I was wondering about the kind of destruction a chemical imbalance can do to a human body, a young man, whose relative too was inside the intensive care unit, struck a casual conversation with me. When I told him about the chemical issue, he got angry. ‘Does he eat a lot of fruits? These days they inject a huge amount of chemicals into fruits and vegetables so
3 comments
Read more
More posts