Showing posts from September 4, 2016
Show All 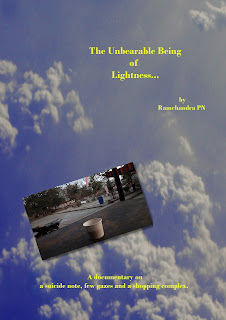 The Unbearable Being of Lightness A few days back I gave some finishing touches to my new work "The Unbearable Being of Lightness", a documentary on a suicide note, a few gazes and a shopping area. I was putting in the credit titles into it. The last title card always is 'A film by...'. Every time I type this title card I invariably hesitate, giving a pause. This time too, it was no exception. As I deleted the words 'film by' I stared into the blank title card wondering, as always, is this really a film? After all I had not used a 'thin flexible strip of plastic or other material coated with light-sensitive emulsion for exposure in a camera, used to produce photographs or motion pictures' to make this work. I had used a digital camera. I thought of using 'A video by...'. But somehow the images of fungus ridden U-matic magnetic tapes that we used to work on ages ago splashed into my mind. No one uses 'A video by...'.
Post a Comment
Read more
More posts