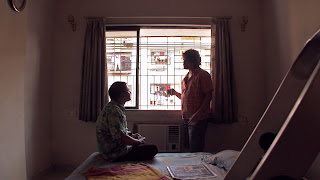 Niraj Sah and Hemant Mahaur in 'Haal e Kangaal' (The Bankrupts) It was started off when friend Shrikant Prabhu goaded me to send a dvd copy of the film to Vidyarthi Chatterjee, a no-nonsense film critic from Kolkata. When I sent it to him, it was Durga pooja time.  After a couple of days when he did not receive my calls, I was worried. The meaning making machine that my mind is, thought that maybe the senior critic has not liked the film.  And then the next day came the call, that lasted all of forty seven minutes. He had not heard the phone ring as the Durga Pooja celebrations around his house was at its peak. After cursing the noise levels, he spoke about my film, Haal e Kangaal (The Bankrupts), the one that I had sent it to him.  During the course of the conversation he said among other things, "The film is unusual, perky, interesting, experimental and smartly made in a positive sense. There are a few films like this, and you should continue to
Post a Comment
Read more
More posts