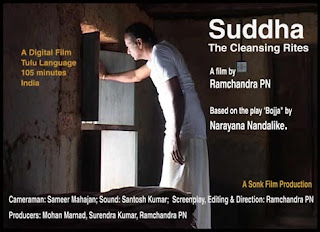 Recently, Chaitra Acharya, asked me a few questions regarding Tulu Cinema, on which she is doing research. Here is the response. Poster of the Tulu film Suddha (The Cleansing Rites)  'I do not hold a brief for Tulu movies, except the fact that I originally hail from a Tulu speaking area of Karnataka, I am sympathetic to the cause of Tulu films and my first feature film is in this language. I do believe that more and more films should be supported, made and exhibited in regional languages like Bhojpuri, Awadi, Konkani, Tulu etc.. - films that reflect the unique multiple cultures that these languages represents.   It is often said that language is inseparable from culture. Destroy a language and you have destroyed its culture. The Tulu people, though living in only two districts of the state of Karnataka in India take pride in their language. Among other things, it is a home to a matrilineal system of family, it is rich in its oral traditions especially the epics, the
Post a Comment
Read more
More posts