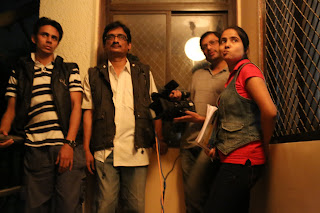 I was in Pune last week to conduct a six days short film making workshop for the TV direction students at my Alma Mater, The Film and TV Institute of India. Ravi Dawala, who was facilitating the workshop, and I interacted a lot during this period. We discussed about a host of topics which included amongst other things - the Big Bang theory, Stephen Hawking, the grand design, atoms etc… We also dealt with the question of making independent self funded films - like the one I am presently working on called Haal-e-Kangaal' (The Bankrupts) and the difficulty of finding an audience for such films, when we are not going through the mainstream distribution system. All of a sudden Ravi asked me a question, ‘Why are you making the film that you are making?' For a second I was speechless. Why was I making films at all? And then I said, ‘I have made the films that I have made because I have said that I would make them. Now, after having said so, if I had not made those those films,
Post a Comment
Read more
More posts