Kanaka Dasa, Jayamala and the cool dude with a long beard…

My home town Udupi, is one of the prominent pilgrim centers in Coastal Karnataka. Everyday thousands of tourists from all over India flock here to visit the Krishna Temple, whose idol – that of a standing Krishna holding a churning stick - was installed seven hundred years ago by the Brahmin saint and philosopher, Madvacharya – the doyen of Dwaitha or the Dualistic Philosophy. There are eight mutts or religious institutions here that manage this temple, taking turn once every two years. Needless to say, the atmosphere around these eight mutts fluctuates between the rigidly religious and the extreme orthodox.

Over the years, many saint poets belonging to the Bakthi tradition have taken their faith, through their simple poems, to the masses. Such activities wee centered aound the and its asthetic idol. Purandara Dasa and Kanaka Dasa were exemplary among such poets.

Kanaka Dasa belonged to the lower caste. He is revered today, his songs officially sung inside the . But it is sheer irony that a few centuries back, during his own life time; he was not even allowed into the . The authorities had then believed that the temple had to be purified if a lower caste entered its premises. But Kanaka Dasa’s faith in Krishna, apparently, was unshakable. Outside the temple, in front of its wall, he sang songs to the glory of the deity.

The legend goes that the great lord himself was so moved by Kanaka Dasa’s faith that a portion of the temple wall broke down, on its own. The idol then did a 180 degree turn, as if it was on a rotating machine used commonly in the making of advertisement films these days, so that it could be visible to Kanaka Dasa. From that day onwards, it is said; members of the lower caste are allowed into the temple.

I saw a news item on a TV channel yesterday that reminded me of Kanaka Dasa. It was about the Kannada film actress Jayamala’s confession. Twenty years back, when her then husband was sick, she had gone into the inner most shrine of the in Shabarimalai hills in Kerala, and had touched the deity’s feet, seeking his blessings. Her then husband apparently got better after those prayers. Well, what’s wrong?

What’s wrong is that Ayyappa is a bachelor god. For ages, the temple authorities had banned young women from entering the temple premises, lest the lord himself was offended! Jayamala was all of twenty seven years when she touched Ayyappa’s feet. She was a popular film actress, ‘enticing’ many a good looking heroes on the silver screen and a thousand of fans beyond it!

Some times we don’t tend to believe anyone, not even our gods! But I’ll keep mum on that front.

That apart, twenty years down the line, Jayamala felt that what she then did was a mistake. So, she called up the temple authorities and confessed. She wrote an apology letter to the good lord himself and faxed it to his 'abode' in Shabarimalai. But what she did not bargain was for a press leakage and the resultant controversy.

Did the priests inside the temple help Jayamala go into the inner shrine? Like Jayamala, over the years, were other women allowed into the inner shrine? We known for a fact that the Late Indira Gandhi, despite being the Prime Minister of our country, was barred from going inside. But now that it is official that a woman has touched the Ayyappa idol, will the purification of the temple take two years as it is rumored to? Will the temple authorities go to the court against Jayamala?

I have heard Jayamala stating on a news channel that she has authentically apologized to the good lord himself and that she need not apologies to any one else, least of all to the temple authorities. If needed she is ready to go to jail or face the consequences for the act she had done years back.

This for me is crucial.

It takes a great amount of courage and inner strength to own up and take responsibility to ones mistakes or what ones thinks as ones mistakes. The act of owning up gives you an opportunity to be complete with your past and therefore with yourself. It therefore allows you to move ahead, afresh.

Not allowing someone into the inner shrine of a temple because of their sexuality may seem to fall purely be under the jurisdiction of the respective temple authorities. On second thoughts, is it? Do we smell of some violation of a fundamental right here?

Having said all and done, I must admit that I simply can’t understand a few little things here. Forgive me for my ignorance, but I still can’t figure out for example - Why did Kanaka Dasa have to adamantly sing songs in front of a stone wall? Didn’t he have anything else to do? Or why did Jayamala have to touch the feet of the Ayyappa idol to pray for her then husband? Where had all the doctors gone? Or closer home, why should my wife Sushma insist that we go to the every time we visit my parents at Udupi? Isn’t there a beach nearby to spend some quality time?

As the cool dude with a long beard once said – Its religion, man! It is really the opium of the masses, man!

Anonymous said…
actually the isthmusie the connection between jayamala and kankadasa was not very clear.
12:14 pm

Anonymous said…
This comment has been removed by a blog administrator.
3:14 pm 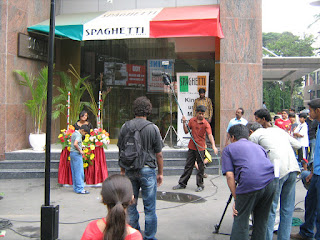